A Pumpkin a Day Keeps the Doctor Away

Is there any other food that defines a season more than pumpkin?

Pumpkins originated in Central America about 7,500 years ago and today provides about $141 million dollars in revenue per year. Over 99% of pumpkin production in the United States supplies pumpkins for carving and Halloween.

With just a ½ cup containing 50 calories mostly from carbohydrate, pumpkin is a nutritional powerhouse! A serving contains 200% of your Vitamin A for the day along with some calcium, iron and Vitamin C. Can you believe it packs almost as much potassium as a banana?! It’s also naturally gluten free, low in fat and packs 3 grams of fiber, which is great for digestion. They are also high in beta-carotene, which is an antioxidant that has been found to decrease risk of cancer cell growth. Don’t forget about the seeds, which of course are a good source of fat, protein and zinc! 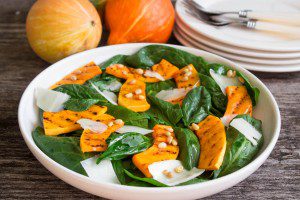 Buying canned pumpkin puree removes the lengthy steps of cutting, carving and roasting. However, if you want to roast your own pumpkin, purchasing the smaller, sugar pumpkins is best. You can poke holes and microwave the pumpkin for about 10 minutes to soften it up. Once soft, you can easily cut and peel the pumpkin for roasting. Pre-heat the oven to 400 degrees F. Oil and season the 2-inch cubes and roast for about 20 minutes until soft.

It doesn’t have to just be found in breads, ice creams, coffees and desserts! Most times processed pumpkin products don’t contain much, if any, real pumpkin at all. Try getting creative and adding pumpkin puree to your smoothies, oatmeal, yogurt, energy balls, soups, chili, pasta sauces or soups! Yum

Karen M. Bobos, MSed, has been in the fitness industry since 1996 and feels her highest accomplishments are those results achieved by her clients through her guidance. She educates clients that there is no trick to being healthy, no magic pills, but rather optimal health is achieved through eating right and moving your body.