Warm Up with Low-Calorie Cocktails 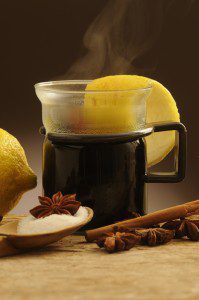 This cold weather is for the birds!  The saving grace in this case; however, is that so many great cocktails can be created using both cold and hot ingredients.  Some of the most classic of cocktails were actually at one time served warm.  Partly due to the lack of clean water and refrigeration in the dark ages-so ice really wasn’t an option unless you chose to use snow to ice your chosen mug of grog, but more really because teas and coffees were used as mixers.

As I grew up we had home remedies that had been passed down from great-great-great grandparents to parents and so on, that specifically called for a little whiskey and honey in tea for the sore throat or that cough that just won’t go away.  You may know it as the Hot Toddy, and today people create this cocktail with a bunch of different base spirits, but most predominantly with whiskey, bourbon, or brandy.  The elements that remain true are the use of a tea, lemon juice and honey-tho often times people will add in such things as ginger, cinnamon, and chamomile to name a few.

When you make a Toddy, it’s really about a flavor profile you might be looking for that will also work with your choice of tea.  Whiskey offers a little bit of spice and gives a nutty flavor when partnered up with the base ingredients which can be very soothing and comforting.  Generally my choice when going the Whiskey route is to find an affordable potstill whiskey like Irishman or Redbreast so I get a bit of a smoother finish.  Bourbon being a little sweeter, and getting cherry notes, you have a variety in choice as to go the rye or corn route.  I like my toddy to be a bit sweeter so I generally skew toward the rye expressions like Bulliet Rye and Angels Envy Rye.  But brandy, that’s really the original base spirit that brings this cocktail to life—and there are quite a few different flavor profiles you can get from the brandy category from apple to cherry to orange, you name it.

Brandy also offers you the opportunity to overlap into cognacs and calvados (apple based) as well.  Cognac offers a longer finish that might be a bit more dense and a little less sweet than a flavored brandy, but you get a good amount of barrel and vanilla notes to work with in the cocktail.  My personal favorite is the Calvados.  It’s made from the distillation of apples (so technically healthy right? “An apple a day keeps the doctor away”) and aged like a cognac.

No matter which way you decide to go in your spirit choice no Toddy is wrong.  But there are some constants that go into each.

*combine lemon juice and spirit in a large mug

*pour in hot tea choice over the spirit and lemon juice

*stir in the honey

*Add dashes of cinnamon and honey, stir to combine all ingredients

Karen M. Bobos, MSed, has been in the fitness industry since 1996 and feels her highest accomplishments are those results achieved by her clients through her guidance. She educates clients that there is no trick to being healthy, no magic pills, but rather optimal health is achieved through eating right and moving your body.