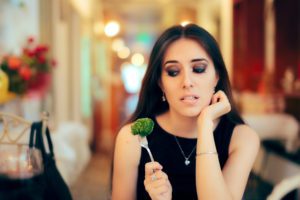 It is generally thought that children are the picky eaters, however for many individuals, picky eating lasts through adulthood. The reason why people are opposed to certain textures like fresh tomatoes and not marinara sauce is considered to be evolutionary; the causes for the avoidance of certain foods and the prefernce for others can be blamed on mom. When your mother was pregnant with you (assuming you didn’t derive from a test tube) she had cravings and other foods she avoided; those were passed to you and your fetal taste buds spent all those months bathing in the flavors of what mom ate. If you have access to mom, give her a call and ask her what her cravings were and what she was repulsed by, perhaps you will see a correlation.

So, you or someone you hold dear are picky; try some of these tactics to expand your palate:

First, try foods on your ‘dislike’ list that you have tried before, but prepare them differently. It takes TEN trials for a child to learn if they like or dislike a food, and it’s no different for an adult, we just tend to be more set in our ways and don’t have a parent nagging us to try something. This might be unbelievable for some folks but: Brussels sprouts don’t have to taste like a soggy mini cabbages and asparagus doesn’t have to be stringy strips of uric acid…. Chop them up, place them on a prepared sheet pan, give them a little spray of oil and a sprinkle of salt and roast those bad boys.  They will be a pleasant surprise from the atrocious food you grew up with.

Second, try relatives of your favorite foods.  Please don’t go to the hassle of looking up a carrot’s genealogy, but do try a parsnip.  They have a similar texture and just like a carrot and can go between sweeter and more earthy. Look for smaller, tender parsnips, and add them to a winter stew. Winter squash all have very similar textures and flavors, perhaps use butternut squash rather than pumpkin in your next pie!

This third tactic is a bit outside the box: try new foods in public with business associates. This will minimize the temptation to spit out the food. This was a trick my sister did (my very own picky relative) with spinach. She was forced to eat a spinach salad with members of her team, and now she not only eats raw spinach but cooked spinach too!

If all else fails, please try to incorporate different colors and flavors as you are willing to. If you have an affinity to green fruit and vegetables, try a red bell pepper; or if raspberries are your jam, try a blackberry. The colors and flavors in produce are also known to the science world as phytonutrients / phytochemicals and they are some of your best defenses against cancer.

Remember that food won’t bite you back, there’s no reason to be scared.